What to eat in Menorca?

What to eat in Menorca? That is the question many of our clients ask themselves when they arrive in Menorca. Many of them assume that, because Menorca is an island, they will only find fish. The truth is that this idea is far from reality and the gastronomy of this small Mediterranean island is much bigger than that.

The origins of any gastronomy can always be found in the place where the products are grown and/or harvested. Thus, the great architects of Menorcan gastronomy are the people of the countryside and the fishermen. Simple recipes that respect the produce and allow the best and most characteristic flavours of Menorcan food to be extracted. 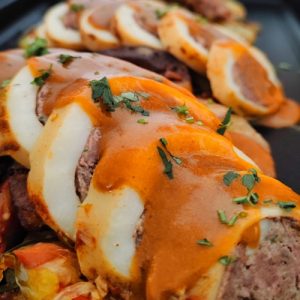 All the recipes depend not only on the ingredients, but also on how they are prepared, how they are handled and how they are cooked. All the cultures that have visited our island, such as the Carthaginians, Romans, Arabs, Christians, British and French, play a very important role here. All this mixture has allowed Menorca’s gastronomy to be exponentially enriched, becoming a European Region of Gastronomy in the year 2022.

For centuries the basis of gastronomy has been maintained in Menorcan homes and in recent years it has been the restaurants and especially the new creative generation of chefs who have rescued ancient recipes and elaborations and have put them on the tables of their restaurants so that visitors to the island of Menorca can discover its history through the palate.

Just to mention a few dishes; ‘Arròs de la Terra’, or ‘Arroz de Moro’, which is actually made with wheat semolina. A typical dish that has been missing for many years and can now be found in the best restaurants. Its ingredients also include meat and part of the pig’s head, garlic heads and potato or sweet potato. Another dish with humble origins but not lacking in flavour is Oliaigo, a soup made with tomato, onion, green pepper and garlic. Few ingredients, careful cooking and, above all, never boiling. As this is a typical country dish, it is served with soups of stale bread and fruit, which depending on the season can be melon or the best known, figs.

The list of dishes is very long and in future articles we will be telling you about the flavours of Menorca.

What to bring in your suitcase to Menorca

You can find out more about which cookies we are using or switch them off in settings.

The best offers and promotions in your email. We want to send you the latest news of Grupo Galdana and keep you updated with our news.

The best offers and promotions in your email. We want to send you the latest news of Grupo Galdana and keep you updated with our news.
< Back to all hotels
Cala Galdana
< Back to all hotels
Sur Menorca
Abrir chat
¿Necesitas ayuda?
Grupo Galdana. Menorca
De lunes a viernes, de 8.30 a 13.00 puedes contactar con nosotros a través de Whatsapp.
Las llamadas de voz no pueden ser atendidas.
¿En qué podemos ayudarte?

This website uses cookies so that we can provide you with the best user experience possible. Cookie information is stored in your browser and performs functions such as recognising you when you return to our website and helping our team to understand which sections of the website you find most interesting and useful.

Strictly Necessary Cookie should be enabled at all times so that we can save your preferences for cookie settings.

If you disable this cookie, we will not be able to save your preferences. This means that every time you visit this website you will need to enable or disable cookies again.

This website uses Google Analytics to collect anonymous information such as the number of visitors to the site, and the most popular pages.

Please enable Strictly Necessary Cookies first so that we can save your preferences!